This week, I managed to finish

.  Not long ago, I listened to Harari’s interview on the James Altucher show that introduced some of the concepts in his next book, Homo Deus.  That book picks up on some of the threads presented at the end of Sapiens; I look forward to reading it next. 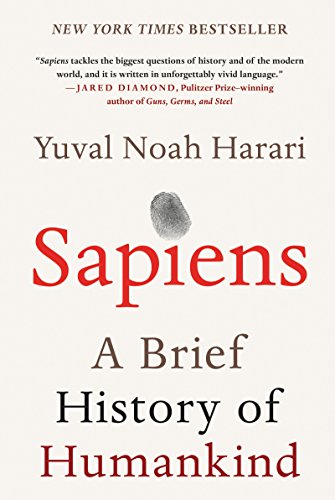 Sapiens was for me personally, very engaging. While it was long, it wove a narrative that bridged a number of my personal passions:  ancient history, anthropology, language and technology.

The book is long, rich and complex and I am not going to attempt to summarize it all, but I did want to capture a few of the key themes I took away.

Something about homo sapiens allowed us to outlive several other human species that walked the planet at the same time. Harari doesn’t pick a side, although you are left to determine for yourself whether you think this was due to evolution, luck or some intelligent design. The important thing is realizing that mankind did not have to turn out the way it did. In fact, even the word “mankind” is misleading as we are but one branch of mankind.

Slaves to the Grain

Our discovery of farming, specifically of wheat, put mankind on a path away from its hunter-gatherer roots. We began to become stationary people.  We grew in numbers and required greater numbers to farm more wheat, to feed more people, and so on.  This concept was incredibly powerful for a number of reasons.  Not only did we set ourselves on a path away from our original skills, but we became highly dependent upon a food source which was initially more rare to come by, due to its fussy growing behaviors.  By nurturing wheat, we effectively became a slave to it.

From kingdoms, to religions to politics, homo sapiens have managed to scale the growth of society through the creation of hierarchical tribes. We first learned as a people that we could stay safe in numbers. Then we realized we could amass more food.  Ultimately, we realized we could accomplish greater feats of building and conquest as we developed larger tribes. Ultimately we created the concepts of nation and religion to justify our new roles.

From Middle to Top

It’s easy to forget that our ancestors were once in the middle of the food chain: larger than some animals, but ultimately easily killed by larger beasts that roamed the earth.  Over time, we would develop the tools and organization to drive those beasts to extinction and ultimately sit where we are today: in command of the global food chain.

Since the industrial revolution, homo sapiens have been accelerating in their understanding and mastery of the world at a speed which had never been known.  We now have the ability to create life, organically and inorganically. This suggests that we are likely very close to breakthroughs that will change the future development of humans.

I love controversial titles, and this was no exception. As you can probably infer, there are a number of arguments contained in the book that can rankle those of different political or religious persuasions. Overall, I felt that it was a mind-opening book that provided an updated history of civilization while dipping into futurism to suggest where we might as a species be going.

Note:  There are some glowing and some harsh reviews of this book out there. I’m not saying its perfect, but I think it’s worth spending some time with.

I look forward to hearing your opinion. Get in touch or leave a comment to let me know your thoughts.